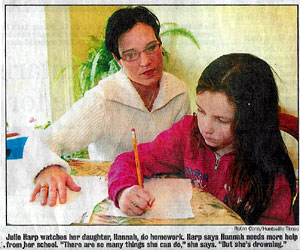 Some days, Julie Harp will ask her daughter about a test. Hannah will say she knew all the answers. She will dig in her bookbag to show her mother the paper. But when she finds the test, she will let slip a faint “ohhh” as her face falls.

Most times, Julie Harp lets her daughter, 9, throw those tests in the trash. Hannah doesn’t like to be reminded that she is different from the other children. Hannah, like so many dyslexic children, has trouble putting what she knows on paper.

Two years ago, Julie Harp paid $250 to have her daughter tested for dyslexia at an outside agency. She took the diagnosis to Hannah’s elementary school in Decatur. There she heard what so many parents hear: Dyslexia is not officially recognized by Alabama public schools.

“Dyslexia is not considered a learning disability. Therefore there is not anything they want to do to help her,” said Harp. “The child, she is smart. There are so many things she can do. But she’s drowning.”

Hannah brings home a math test with the answer 41 circled. The correct answer is 14. Hannah knew it, could say the answer aloud, but the teacher marks the flipped version wrong. The low grades continue. 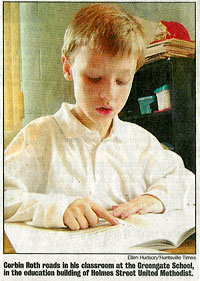 Corbin Roth of Huntsville uses a ruler to point to the word endings on the board. “F T says ffft,” he announces. “L F says ulf.” Every day, at Huntsville’s Greengate School for dyslexic students, he rehearses such basic rules for one hour. He sits one-on-one with a tutor trained to help him. He records his progress with the written word in a daily journal.

Corbin is only 7. But his story started much the same as Hannah’s.

“We had noticed even before kindergarten,” said his mother, Melinda Roth. “Here’s a kid who is being read to and played with and he doesn’t know the letters of the alphabet. Everybody said ‘He’s a boy, he’ll catch up.’ “

At Hampton Cove Elementary, Roth said her son flunked the state test to screen the reading ability of kindergartners. By Christmas, he could barely recite half the alphabet and he had begun flipping letters, b for d, p for q.

“The school’s suggestion was that he do kindergarten again,” said Roth.

Julie Harp caught on during Hannah’s second time in first grade in Athens. Because most teachers aren’t trained to diagnose dyslexia, parents must strike out on their own.

Julie Harp paid for a diagnosis from the private Dyslexia Center in Decatur. This school year, she moved to Decatur and enrolled Hannah in the second grade at Chesnut Grove Elementary.

Julie Harp doesn’t blame the school. She said Hannah’s teacher is kind, but bound by rules. She said Hannah writes better in cursive, but students aren’t allowed to do that in second grade. Harp is frustrated and she wants help for her daughter, who is already developing natural coping mechanisms.

There are long-term implications beyond reading. Children with dyslexia, left unaided, can lose self-esteem. At the local dyslexia support group, parents say this leads to poor study habits, hatred of school, even behavioral problems in class.

“I like reading,” says Hannah. Her mother listens in disbelief. “I like playing outside on the playground, science, reading,” Hannah continues. Hannah is shy about the very word dyslexia. Hannah is doing well at math and she likes to draw.

But for her, reading can lead to headaches. Earlier, reading even caused Hannah to be sick, said her mother. Hannah acknowledges this, but brushes it off. Reading “is kind of hard,” she says, “But not that hard.”

Hannah goes outside to play with her sister and a friend. A short while later, they are in the back of the house playing dress-up. Hannah has fashioned a gold satin gown. Today, she is a princess.

At Hampton Cove, Roth began to worry about wasted time. And she began asking questions. She said the school told her it would take three to four months just to test Corbin for special education. She said she met with the principal and the gudiance counselor.

Before he could qualify for assistance, the teacher had to be given six weeks to try to teach Corbin differently. As with Hannah or any student, there would have to be committees and meetings and evaluations before Corbin could be assigned to special education. The process takes months.

Corbin couldn’t recall his phone number or birthday, but his mother said he set up the game Mousetrap without instructions. Yet, he couldn’t rhyme words.

Researchers have established a genetic component of dyslexia. Hannah’s uncle has dyslexia. Corbin’s grandfather had it.

“In March, I was desperate and I took him out of school,” said Melinda Roth.

At one point, Julie Harp also took Hannah out of school. This is a common crossroads for knowledgeable parents.

Harp said she worked with Hannah at home. “You only did it for three days,” said Hannah. Harp has five children and Hannah is the oldest.

Lately, Harp has been training herself, reading books like “The Gift of Dyslexia” by Ronald Davis. Since then, she began using clay so Hannah could sculpt and touch the letters of the alphabet. The sense of touch helped Hannah’s recall. Harp also reads with her daughter at the kitchen table most days, encouraging Hannah to close her eyes and see the word.

Julie Harp is thinking about becoming a special education teacher.

No mention of D-word

Melinda Roth hired a private tutor while she worked with her son at home.

She also had her son tested for dyslexia at the Greengate School in Huntsville. She continued to pursue options at Hampton Cove, eventually having Corbin tested for special education three months after she pulled him out. Corbin qualified for extra help from a special teacher in language, reading and math services.

At Hampton Cove, there was no mention of dyslexia.

“They all agreed with me he had a problem. They were just so bound by the bureaucracy,” said Roth “I can’t blame them. It was very, very frustrating.” 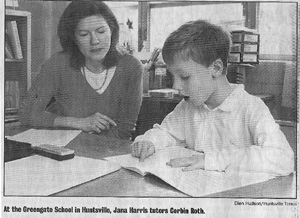 Special education advocates often cite Decatur as having one of the better systems in North Alabama. But even there, services are governed by federal rules.

“We function in special education under IDEA (the federal Individuals with Disabilities Education Act),” said Bill Gilchrist, supervisor of special education for Decatur City Schools. “There are identified categories under IDEA. One of which is specific learning disability. There is not a category called dyslexia.”

Even though there’s no category for dyslexia, Principal Loretta Teague said Chesnut Grove tries to help every child no matter the difficulty or designation.

“We sit down and put a plan in place. It’s not like we ignore it. We don’t diagnose. But we do have a process and I don’t want any child to fall through the cracks.”

Hannah went through the months-long process, starting with a review by a team of teachers and administrators, moving onto a screening committee and eventually qualifying for extra reading help through special education.

Sometimes the special education teacher comes into Hannah’s regular class to help with reading. Other times, Hannah is pulled from the regular classroom for extra reading work. But at those times, said Hannah’s mother, Hannah reads with children who are not dyslexic. Those children may not learn the same way nor need the same help.

By the time Hampton Cove offered extra help for Corbin, Melinda Roth had moved on. With directed tutoring at the Greengate School for dyslexic children, she said, her son in one summer had memorized the alphabet and started on multisyllable words.

At Hampton Cove Elementary, Principal Dale Kirch said she isn’t surprised at the success Corbin’s had.

“I can’t compete with a one-on-one or three-to-one ratio,” said Kirch, acknowledging the small classes at the private Greengate School. Kirch added: “I do believe our system could have assisted the child.”

Melinda Roth decided to enroll her son for first grade at Greengate. The school, operating out of a church in downtown Huntsville, provides 14 teachers for 19 children. Each student has dyslexia.

Corbin reads over the words drill and cliff, fluff and class. As he says each letter, he points to a finger. “Good, what do you notice about the words on this section,” asks his one-on-one tutor, Jana Harris. Corbin recounts the “floss rule,” or how two like consonants at the end of the word make one sound.

After a few more sentences, Harris stops to ask: “Does this help you?”

“Yeah, it does,” says Corbin with an earnest look. He’s a serious boy, conscious of dyslexia, conscious of the fact that students here eventually return to public schools. “When I got 6, they found out I was alexic,” he says. “Now I know how to read pretty good. I’m doing the ending blends.”

Corbin still writes the letter “z” like a lightning bolt. But he says he’s eager to move from two syllable to three syllable words.

The price of help

Melinda Roth believes in Greengate School, where she, like many parents, spends time as a volunteer.

“If I had listened to what the (public) school was saying I could very easily have woken up with a fourth-grader who couldn’t read,” said Roth.

For Hannah, the school is out of reach. Julie Harp pulls out another flier showing one week of dyslexia courses in California. The classes cost $3,650 for five days. She’s looked into local tutoring, but that’s $350 each week for only two hours a day, twice a week.

“Who in the world can afford that?” she asks. “Everything that I get hopeful about, that I think might help her, these are the price ranges I’m looking at.

“It hasn’t gotten better,” says Harp. “If I could figure out anything I could do to make any kind of difference, I’d be out there.”