By KARI HAWKINS For the Huntsville Times 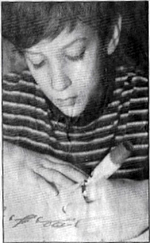 It’s called dyslexia, a reading difference that makes it difficult to organize ideas for speaking or writing, memorize the alphabet and math facts, comprehend what is being read and follow oral instructions.

Like many children with this reading disability, Mark was diagnosed in the third grade, when students advance from activities that teach them to read to assignments where they use reading to learn.

Like others coping with dyslexia, Mark has struggled with what has seemed like an invisible barrier that has kept him from excelling in school. He has felt the embarrassment and frustration of not being able to keep up with the rest of the children in his class at Weatherly Heights Elementary, despite having a high level of intelligence.

“I’ve cried in class,” Mark said. “It can hurt when you are working in class on English or spelling and one of the other kids sees where you are on your paper and they say ‘Gee, you’re still on number four!’ My teacher has helped me. But it still hurts when kids say things like that.”

Dyslexia affects about 10 percent of the general population. In Huntsville, that translates into an estimated 4,000 school-age children.

Although they typically have average or above average intelligence, dyslexic learners process information differently than non-dyslexic learners. Symptoms include the inability to associate letters and sounds, difficulty rhyming words, poor sequencing of numbers and words, and letter and number reversal.

“The problem ranges from mild to severe,” said Mark’s father, John Allen. “When the class curriculum starts to be driven by reading, these students start falling behind because they are struggling with reading.”

And that can hurt a child’s self-esteem.

“I can’t imagine anything more frustrating than a student knowing or feeling that they are smart, but not being able to show this in the classroom,” Allen said. “Some kids start thinking they are dumb. Kids at school can be so cruel with their comments that reading out loud can get to be a real nightmare in class.”

Unlike many of his more famous predecessors with dyslexia, Mark has received early intervention that has made it easier for him to manage his disability. Once diagnosed, Mark had the benefit of working with tutor Marcia Ramsey, who has used multisensory instruction to overcome the barriers created by dyslexia.

“There are several multisensory language techniques that can be used,” she said. “They all have in common that they try to access into a child’s learning through as many sensors as possible. They use visual, auditive, cognitive and tactile techniques.

“With Mark, that means using his hands, eyes, ears and mouth all at once so that the information is coming in through more than one track of neurons in the brain.”

Ramsey’s interest in dyslexia is both professional and personal. A 30-year teacher with training in teaching children with dyslexia, she also has a teen-age son who is dyslexic.

She has been working with Mark’s father to start a school for dyslexic children in grades 3-5. Plans call for the school, to be called Greengate School, to open in the fall of the 2002-03 school year at a location near Cummings Research Park with about 30 students enrolled.

A public meeting to introduce parents to this new school will be held on Feb. 17 at 2 p.m. at the Huntsville-Madison County Public Library. The school will also be discussed at the monthly meeting of the Madison Learning Differences Support Group on Feb. 27 at noon at Asbury United Methodist Church. 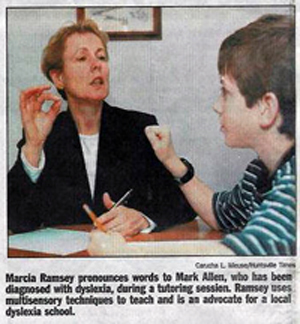 “This will be a full-time school,” Ramsey said. “It’s one thing to remediate language, but the student is missing so much in other classes. Their struggle to read can cause them to fall behind in other academic areas such as math, science and social studies.”

Having evaluated several well-known dyslexia schools throughout the country, Ramsey and other organizers decided their school will teach all subjects using multisensory methods such as Ramsey has used with Mark.

The school will also use a lot of one-on-one instruction, with the teacher-student ratio being one teacher to every five students.

Organizers expect the school to grow to about 80 students, attracting them from a 100-mile radius.

Allen estimates that it will cost about $200,000 to start the school. Those funds will come from donations, grants and other sources.

“We’re starting with third grade because that is where most students are diagnosed,” said Allen, who is serving as the school’s president. “But we plan on adding grades as we go along so that we will be a first-through-eighth-grade school.

He thinks the school will fill an important educational niche.

“We’ve talked to educators, heads of schools, teachers and psychologists, and we know Huntsville needs a school like this,” he said. “We feel positive we are doing the right thing.”

Although dyslexic students now can obtain assistance from resource teachers, special education teachers and private tutors, they often feel as though they are not as smart as the other children in their class.

“Dyslexia affects not just reading, but all subjects, especially math,” Ramsey said. “Children’s comprehension is compromised because it takes them so long to decode a sentence. Their intelligence is not questioned, but they process learning differently, and they need a different way to learn.”

At this school, these children will be able to learn those different ways in an environment where they won’t feel different from their classmates.

One of the problems with diagnosing dyslexia is that often parents don’t want to admit their child has a learning problem. Allen hopes the new school will also provide support for parents who are trying to accept and understand their child’s reading difference.

“It was such a shock when we learned Mark had dyslexia,” he said. “Here is this bright, funny, active, mischievous kid who is as bright as any other kid with insights far beyond his years, and he couldn’t remember what he had just read.

“Some of the problem these children face is that their parents don’t want to admit there is a problem. They push it off and sometimes kids go undiagnosed.”