Home | Fighting for Change: The Mother

As an insider, she still needed years to achieve results 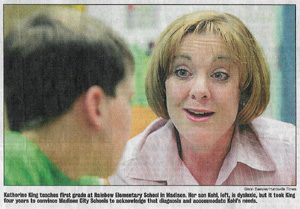 Last year, Kohl Pittson wouldn’t have known that “qu” was the chicken sound because q doesn’t go anywhere without u. Last year, Kohl would have frozen on seeing a long word, unaware of how to break it into parts.

Last year, at Rainbow Elementary School in Madison, he may have sat in class and pretended he could read.

“The hard part is, you see the word backwards and you might be reading a word somewhere else,” said 10-year-old Kohl, whose eyes sometimes scan a word from the bottom of the page while reading a sentence at the top. “It makes you stress out a lot.”

After four years of fighting, Kohl’s mother succeeded in prodding Madison City Schools to acknowledge the demands of her son’s dyslexia. But Katherine King is not a typical mother. King is also an insider, teaching first grade down the stairs from her son’s classroom at Rainbow.

For King, the warning signs began early. In first grade, Kohl couldn’t recall the last five or six letters of the alphabet. He told his mother that words moved around on the page. He would often begin writing at the bottom of the page.

“We knew there was a problem,” King said. “I’m an educator but knew very little about what dyslexia is.” 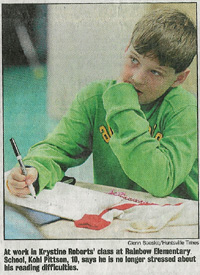 During Kohl’s second trip through first grade, King had her son tested and diagnosed for dyslexia by the Alabama Scottish Rite. That’s when King’s campaign began.

Having sat on the other side of the table during conferences about student services, King knew what to ask, what to expect and how to request help. She said teachers are often discouraged from recommending expensive services. Still, King had to school herself in special education law and hire attorney James Irby before the system would adopt a program she believed would help her son and others like him.

In the end, King pressed for the Wilson method, which uses an energetic combination of images, objects, written words and spoken language.

“I wouldn’t say that,” said Maria Kilgore, director of special education for Madison City Schools. “I would say Wilson (teaching method) is in Madison City Schools because of the needs of children, and Katherine King certainly did have a concern and brought it to our attention.”

Fifth-grader Korea Brunner is also dyslexic. She takes the Wilson courses at Rainbow. Her parents, Ernest Brunner and Adrienne Walls-Brunner, said there hasn’t been enough time to evaluate the program. But they said Korea used to begin most sentences with the phrase “I wonder if …” Since Wilson, they’ve noticed that Korea has been writing more original sentences.

At Rainbow, King had more than just legal help in gaining recognition for dyslexia.

At Rainbow three years ago, Ernest Brunner said, “I don’t think a lot of people believed there was a such a thing as dyslexia. They just gave us a funny stare.” Then Margaret Petty arrived, Brunner said.

Petty, who is dyslexic, began working as a special education teacher at Rainbow at the same time King was fighting for her son. Petty now teaches the Wilson classes and said they have helped greatly. “Two months ago these children couldn’t begin to do what they did today,” she said after one spelling lesson.

At one point, King considered giving up and sending Kohl to private school where teachers can be more flexible, or even choosing a private school dedicated to dyslexia. But she decided Madison had both the money and the responsibility.

“I’m sure it comes down to just that. I was thinking Madison city, we could afford it.”

At school, Kohl had been tested and labeled gifted/learning disabled for both a high IQ and low achievement scores, King said. Without that label, there would have been little early assistance.

“Children with dyslexia are not automatically in special education. It is not recognized as a special education code,” Kilgore said. “Sometimes the children don’t qualify, and that’s where a lot of the frustration lies.”

At school, Kohl tried the Alabama Scottish Rite program. That’s a videotaped training session the charitable group provides for free. But the dyslexia lessons work only with close supervision by a teacher, said Dr. Denise Gibbs at the Scottish Rite. Kohl said he often watched the videos alone. “It didn’t help at all,” he said.

Kohl tried Language!, which state education specialist Dr. Julia Causey suggests as Alabama’s best program for training dyslexic children. “It’s a joke,” King said. “Language! was designed to be in the upper grades, and it was designed to be rapid pace.” She called it a dumbed-down program.

“We did everything. Everything we had access to at school he had been through,” she said.

At the end of third grade, Kohl still couldn’t read well. But Kohl is well-spoken and bright. He takes Tae Kwan Do and plays the guitar. His math grades have been unaffected.

In the end, not only did Madison adopt Wilson, it went a step further.

Madison schools also invite the dyslexia students who don’t necessarily qualify for special education. “When they came up to the plate, they swung hard,” King said.

At first, Kohl didn’t want to go. He didn’t see any help from earlier reading programs and didn’t expect this one to work either. But a few weeks ago he said he had his first high score on a fourth-grade spelling test.

But what works for one dyslexic student may not work for all, King cautioned. And the Wilson method is just one of numerous instructional techniques based on the work 70 years ago by dyslexia pioneers Dr. Sam Orton and educator Anna Gillingham.

Petty said more important than the particular technique is early identification of children who aren’t learning to read. “I think we need to have far more reading intervention,” Petty said. “The earlier the better.”

Today, Kohl reads the menu, he sings from the hymnal, he adds inflection when reading aloud. He still follows along with his finger in the text and may stumble over longer sentences.

But most significantly, Kohl said he now remembers what he reads. And in recent weeks he’s even started writing a series of short stories of his own, with titles such as “Llamas in Pajamas” and “Llamas Do Karate.”

“He’ll always struggle. He’ll always have to work harder than the next,” King said. “It’s not a cure. But (Wilson) has given him an opportunity to use something that will help him every step of the way.”