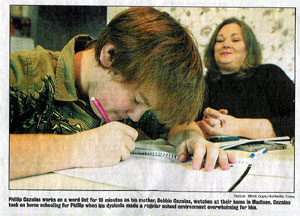 The little boy would overreact, bump his classmates, fall down, ignore his teacher and act distracted. When reprimanded, he would have a meltdown, screaming into tears.

Every day at school was a bad day, even though the child was very bright.

Many people would diagnose the child as simply “bad.” But the child, profiled in the September-October 2000 Networker, actually had a rare form of autism.

Parents of struggling children who are not obviously mentally or physically disabled often have a difficult time convincing anyone their child needs something other than “a good spanking.”

Very slowly, and little by little, a few activist parents are fighting to change that as scientists learn more about conditions such as dyslexia, hyperactivity and autism.

By the time Helen Cole of Huntsville had heard stories of children like the boy mentioned above, whose behavior mirrored her son’s, her boy was in first grade.

Her son, now 12, is in a regular classroom now. But that is after years of therapy for a condition doctors didn’t even have a word for then: Asperger’s Syndrome.

Cole had known for years, the way mothers know these things, that something was different for her son. Simple tasks – brushing his teeth, buckling a seat belt – were hard. A birthday party’s boisterous joyfulness sent him under the table in a panic.

“He’ll grow out of it,” she’d been told, or, more often: “He just needs good discipline.”

And she hated to think the child had a problem she and her husband, both loving parents, couldn’t fix.

But, Cole said, they definitely couldn’t fix it on their own. They decided it’s better to “label” than it is to ignore a problem.

“You have nothing to lose and everything to gain by at least checking it out,” Helen Cole said recently. “If children have a disability, it’s an exponential curve if you don’t intervene.”

This is advice she wishes she’d had before her son entered school.

“Not until we had the situation staring us in the face did we do something about it,” she said. “I regret that. I do. I have to forgive myself every day that I didn’t do more sooner.”

Her son was eventually diagnosed with problems that arise in the spectrum of conditions that includes autism. It is much harder, sometimes impossible, for these children to ignore certain sensations – the label in their T-shirt at the back of their necks, for instance. They are hypersensitive to their environment.

Autism spectrum disorders are just the latest of newly understood conditions that can keep children from learning. Like dyslexic children, these children are often obviously bright, so they don’t get early screenings.

And often the last to be helpful is a family physician. 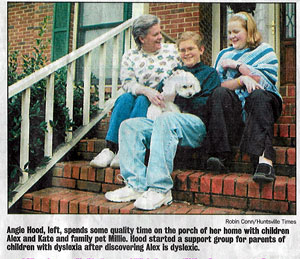 “Doctors are, like, ‘Oh, Mom, they’ll be OK,’ ” said Sheree Jacks recently from her office in the Child Development Center, a therapeutic preschool in Fayetteville, Tenn.

But parents should trust their instincts, said Helen Lowe, director of the Fayetteville center.

“You know when something is not on target,” Lowe said.

“However slight their concern about their child’s development, we encourage parents to call us,” said Patrick Kelly, one of two district coordinators for the Alabama Early Intervention System.

Often, the most valuable information will come from other parents.

Angie Hood didn’t have that, though, when her son, now in sixth grade, was diagnosed at 7 with dyslexia. After a few years of struggling to get the diagnosis – her son, like many dyslexic children, is bright enough to hide his condition with excellent memorization skills – she started the informal Madison Learning Differences support group.

Most of the parents who attend the once-a-month, one-hour lunchtime meetings have children learning to work through their dyslexia.

It’s a hard-earned expertise. Learning about and then attempting to get help can consume families.

“I figured it would be a shame to waste all we’ve learned by not sharing,” Hood said. “And it helps to be with parents who know exactly what you’re going through.”

Another resource is an educational consultant, an expert, often with a background in psychology or education, who is certified to help parents find the best educational environments for their children.

The only licensed educational planner in Alabama is Rosalind Marie, a former school psychologist who has a private practice in Madison. Her work ranges from helping students find the best-suited college to helping families find enrichment and remedial or therapeutic help for children struggling in school or society.

Most parents, Marie said, will try to get the system to change, hire tutors and agitate for services public schools are supposed to provide for any child needing extra help. This can work. Sometimes.

“But your ability to have the environment change may be limited,” Marie said. “And letting a child stay in an environment that doesn’t help them means you will pay later on.”

Many parents find it necessary to move the child to another teacher, another school or even home.

“It is so hard for teachers,” mother Debbie Cazalas said as she discussed her decision to home-school her son, 16, who struggles with both dyslexia and attention deficit disorder. “They have so many kids with so many learning styles. They just don’t have the time.”

“I think Huntsvillian’s are under-utilizing summer programs,” Marie said. “They cost money, but not near what boarding school costs. I’ve seen kids go for a summer, pick up friends and a set of skills for dealing with dyslexia or learning disabilities. I’ve seen kids find out that they can read. It’s almost like a booster shot.”

But good results are contingent on a child’s getting into a program with research-based activities and a trained staff.