Disability once led local attorney to drop out, enlist 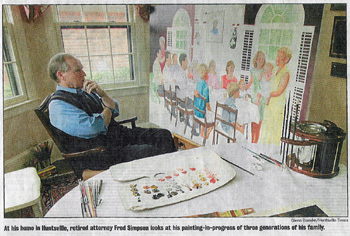 Fred Simpson starts with the tour of his renovated downtown office. He tells the children about 250 jury trials, about 12 years as Madison County’s district attorney. He talks about two Cadillacs and the trips to Europe. Then he swaps his focus.

“I know something about you,” he announces.

After a career spent swaying juries, Simpson can hold an audience. He tells the children he knows how they struggle to remember names, he knows about the intentionally messy handwriting, he knows about staying home sick on test days and trying to avoid the teacher’s gaze when it’s time to read aloud.

He knows what it’s like when people think you’re stupid because you can’t spell.

Fred Simpson, the attorney who tried 64 murder cases, the author of three books on Huntsville history, the man who worked through law school so he wouldn’t have to take orders for a living, is dyslexic.

“The way that all dyslexia people get through life is they hide what they do,” said Simpson, telling his story from his home in south Huntsville.

“My disability is, I can’t spell and I can’t learn to spell and I can’t pronounce words,” he said. “People downtown will not know I’m dyslexic. The other lawyers don’t know that. But I know now I’m not stupid.”

Simpson didn’t know the word dyslexia when he was taking a lick for every misspelled word on the weekly spelling test in Calera. Simpson was even a top debater and the cartoonist for the high school paper in Montevallo, but his inability to spell or read aloud caused him to drop out.

Simpson quickly sated his appetite for taking orders in the Air Force. He decided to earn his general equivalency diploma and make his way through Samford College.

Then relying on the help of his wife, Peggy, he earned a law degree from Vanderbilt University. At age 29, he took his first job as a lawyer and encountered his first secretary. He soon asked if she could type a letter as he spoke. Of course, she answered. “That was freedom day for me.” 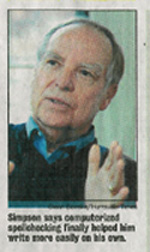 Simpson went on to serve as Madison County district attorney from 1969 to 1981 and later opened a law firm. In court, unlike his colleagues, Simpson rarely took notes. If he did, sometimes he couldn’t read his own writing.

Peggy first suspected something amiss when her husband asked her how to spell “nephew” for a paper in law school. But it wasn’t until the mid-1980s that the two came across a Reader’s Digest article on dyslexia.

“I finally came to realize that was my problem,” said Simpson, willing now to share this story to help children who face similar struggles. “I think it’s unfortunate that it’s considered a sign of weakness. But it is, I think, and I never let anyone know about it.”

In fact, reading comes easily for Simpson, and always did. He said he reads better than a page a minute. “I can grasp the meaning of subjects without pronouncing the words in my head.” But he may skip over proper names and recall characters in a novel as A, B or C. Foreign words or medical terms can also be daunting.

Writing came much more slowly, but it wasn’t impossible. He might have trouble keeping from thinking of a sentence ahead of the one he was writing, he said.

But then there was spelling. Even when he would turn to the dictionary for help, sometimes he couldn’t string together enough letters to find the word he was hunting. After he learned the proper spelling, the letters would vanish from memory. Messy handwriting provided camouflage in college.

In court, secretaries and paralegals kept notes for him. Finally, computerized spellchecking helped him write more easily on his own. Even Sonya Brasher, his paralegal for 15 years, said she never learned to decipher his scrawl.

But never one to shy away from a challenge, Simpson late in life faced the very crux of his disability. He began to write, publishing such chronologies of Huntsville history as “Murder in the Heart of Dixie” and the “The Sins of Madison County.”

“Life has been a challenge for me,” he said. “I could have quit at any time.”

But Peggy said he’s always had many strengths. “He can talk you under the table,” she said. And lately she thought he might share his decades of legal practice directly with students, using that penchant for conversation as a legal professor.

Simpson balked. “What if I was asked to write something on the board?”